Breakdown
Good glass is important, but just as important is the tripod and head system that glass sits upon. The Sirui ET-1204 w/ VA-5 Head Kit is ideal for any hunt during any season. With a combined weight of just under 4 lbs, there's no reason to leave it behind. You will spot more game and enjoy your time behind the glass. Built to handle the most uneven of terrains this combo is compact enough for any backcountry adventure.

Upgraded to the Sirui from the Manfrotto "Be Free" after I used a friend's VA-5 and 1204 combo on an elk hunt. I instantly noticed the difference and was picking up mule deer bucks out to 1500 yds with 10 power binos. The stability advantage alone is worth the extra coin. I noticed a slight bit of play in the Manfrotto's head in wind, but the Sirui kept even my 85mm spotter still in 20mph winds when set correctly. It should also be noted that going from the magnesium Manfrotto to the Carbon Fiber Sirui saved me about 1.5lbs in weight. The kit also comes with a interchangeable short center post if you wish to splay the legs all the way out and get your tripod low. If you're on the fence, buy it. 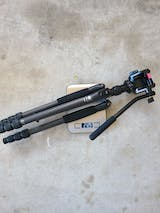 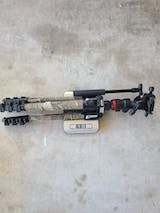 The Tripod and VA-5 head are a great combination. Lightweight, but sturdy, even in a moderate wind. The tripod legs are easy to operate and stay put when locked in. The movement of the head is smooth as butter with my bino’s and spotting scope. I have a heavier spotter and the VA-5 head handled it with no issues. My favorite part about it, is that when you lock the head’s elevation knob with the spotting scope attached there is no flex or change in field of view due to the weight. It just stays on target. Very happy with this purchase.

While on the range completing a final check of my rifle five days prior to leaving on a four day Idaho Mule Deer hunt, my optic tripod broke. Knowing the great customer service I've received from Go Hunt Staff on prior occasions, I called them and spoke to Cody.

I explained my optics and the type of hunting I typically do and he recommended the Sirui ET-1204 VA-5 Fluid Head Tripod. He expedited shipping to ensure it arrived prior to my departure.

Upon arrival I set it up and was immediately impressed with its lightweight and incredibly smooth movement. The legs locked securely and the VA-5 Head was easy to adjust. I threw it in my pack and headed for Idaho three days later where the tripod and head continued to impress.

We hiked nearly 35 miles in four days, spending numerous hours behind both binoculars and a spotting scope mounted on the kit I ordered. It was awesome.

While I didn't fill my tag, we saw some awesome country and, as always, had a great time.

With the final preparations nearly complete five days prior to leaving on an out of state hunt, replacing a piece of important equipment such as a tripod was not in my plans. The customer service I received from Cody at Go Hunt made a huge difference.

The gear he recommended worked great, arrived on time, and was exactly what I was looking for.

This is a really nice tripod and head. Very smooth for easy glassing. Used with 15x56 Binos and it worked great.