Breakdown
The new Gen 2 Extreme Bipod is centered on the proven foundation of the first generation bipod with enhancements influenced by years of field use and customer feedback. The vision behind the Extreme Pod was to take a lifetime of extreme western mountain hunting experience and condense it down to create the most efficient and versatile long-range shooting platform ever created. The Extreme Pod is built upon a revolutionary ball and socket technology that gives the shooter 360-degree pan availability. In addition, telescoping carbon fiber legs and textured twist lock leg adjustment gives the shooter infinite rotational adjustability. Push-button side deployable legs allow you to get into shooting position quickly. An indexing lever lock handle allows the shooter to position the locking handle to fit whatever hand configuration the shooter finds convenient. This bipod is extremely user-friendly and functional in every situation.

The Extreme Pod can be mounted on any weapon with the aid of its industry-standard picatinny mounting system.

Great looking product, Rock solid design! Look forward to getting the leg extensions and back pod. 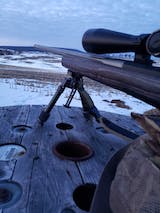 M
M.
Light weight and solid, but for me it took a bit of practice to learn to shoot good groups with it.

The short - this works as advertised, is light weight, and I'd recommend it. But a word to anyone like me that hasn't shot much off a bipod. I have always shot off my pack, a log, or just made it work with whatever was in the field. That said I've had a lot of situations where I thought it would have been quicker, more accurate, and overall nicer to have a bipod. Having not had a bipod before I got the taller one thinking I can always fold the legs down to get closer to the ground. Well that was flawed logic. First it is hard as heck to adjust and lock the legs at an angle and you loose side to side adjustment to true your scope then the legs are at an angle forcing you to do it by extending the legs (not fast and a pain in the butt). Second is it was impossible for me to get consistent recoil and thus acceptable groups with the legs at anything other than vertical. So I recommend getting the shorter bipod and staying closer to the ground. I would sell this version and get the shorter version if I could find someone to buy this one. Next is shooting consistent groups with a bipod was not easy at all. Off bags my rifle will shoot sub 1/2 MOA consistently as long as I do my part. I had issues shooting 1.5 MOA the first couple times using the bipod and the groups were all over. Some groups would string vertically, others horizontally (with no wind). Well it turns out that for me I need to 1) absolutely anchor those legs in the ground. If you're shooting off a hard uneven surface like gravel - forget it. You won't get consistent recoil and your groups will reflect that. Make sure there are no rocks or anything to bounce the legs during recoil. 2) I have to pre-load the bipod a lot (i.e., push into it). I slide back and forth to mimic recoil and make sure the barrel path is straight back (not up/down left/right). 3) Just like bag shooting, I have to have consistent pressure, cheek-weld, grip, etc. The bipod amplifies any inconstancy I could get away with on bags or shooting off my pack for that matter. 4) Once I could shoot good groups my precision was better, but even that was inconsistent. Meaning I'd shoot a 1/2 MOA string and be 1" high, then my next string without adjustment was 2" right, and so on. It took a lot of rounds to get a good consistent group AND zero. The bipod zero is within a MOA to a bag zero, but it is not the same for me. So on longer shots, it is very important for me to know the difference in zero height. I ended up putting multiple rifle profiles for the same rifle in my Kilo2400 so the downrange ballistics match up depending on my shooting position. It doesn't make a difference for hunting accuracy out to 300-350 yds, but beyond that, the two sub-moa groups start diverging enough that it starts to matter. After quite the learning curve and a couple of hundred rounds, I can now do consistent sub 1/2 MOA groups at 200 yds off the bipod. 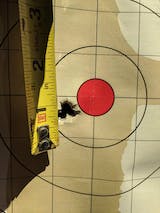 Crazy convenient, durable and versatile. On the spendy side, but you get what you pay for! I got the 10 inch and its a bit long for bench shooting but I'm sure it will come in handy for hunting.

Stays in place better while shooting. I’ve used the gen 1 and have to reset between shots, I don’t have to with gen 2. The big lock handle certainly helps.