8 reviews
OUT OF STOCK

A custom made with your mounted arrow claw two holders on the side of my crossbow and I ended up getting rid of the arrow Quiver a.k.a. bolts 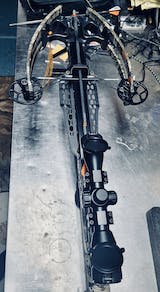 When I first tried to put on the arrow claw, I wiped the riser down with alcohol, waited for it to dry and very carefully placed the tape side of the claw to the riser. The tape that came on the claw would not stick. So, I have some very good 3M double sided tape I replaced the original with and it seemed to stick very nicely. I really like how the claw held the arrow in place, it seemed like the perfect solution paired with my Hamskea rest. The next day, I tried it out, after the second shot I looked down and the claw was gone. I must have stayed connected to the arrow when I shot it because it was no where to be found. I really liked the idea and maybe I could have helped hold it to the riser with a few spots of super glue and also just slightly trim the claw that hold the arrow for a little less pull on the claw during the lift away. Not sure I will waist my money on another one

Does it hold your arrow in place? So I don't have to wrap a finger around the arrow,like while walking?