12 reviews
Only 1 left in stock

Breakdown
The Poseidon Pro is a workhorse power bank built for the elements and for any adventure. This lightweight charger is perfect for backcountry excursions as well as simple day trips. The Poseidon Pro is IP68 certified for dust, sand, shock resistance, and can be submerged in 1.5 m of water for up to 45 minutes! Utilizing a USB-C charging cable the Poseidon Pro is capable of charging times up to 2.5 times faster than traditional phone chargers. The 10,200 mAh internal battery provides loads of power for your electronic devices and is rated to run most smartphones continuously for up to 36 hours. A built-in flashlight and SOS emergency light add to the safety and functionality of the device. A ballistic fiber-reinforced USB-C cable, durable cable managing strap, and a 5-function utility carabiner are included. For extended backcountry stays you can charge your Poseidon with a Goal Zero solar panel.

Received damaged/cracked unit. I’m not one to complain but was sent an email to review this specific charger so here it is. Cracked case to the charger. Doesn’t seem to impair performance, so it is what it is. Works well otherwise just kind of a bummer for how hyped up the toughness was of it. 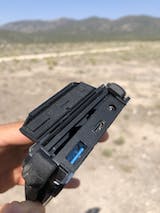 This is by no means the fault of goHunt, but this charger doesn’t back its claims. The first charger I received was broken on arrival. The housing was cracked on the two top corners and the anchor screws were rolling around inside. It sounded like a baby’s rattle. Jill at goHunt was awesome and shipped me out a replacement at no cost. It arrived full one intact but would fail at charging once it drops from four green lights to three. I have tried every reset tip online, even tried different cords, but the charger still shuts off once it’s power level drops from four to three. As stated initially, this is by no means the fault of goHunt, it’s on Dark Energy, but I would pull this item based on other reviews not found here. This item simply isn’t reliable to take into the backcountry - at least not thru my experience. It’s a great slim design and the weight vs performance claims are awesome.

This little guy charges everything fast even if you're using the device. I charged 2 phones, a portable speaker, and a light scouting this weekend and only used 1/4 of the power. All while I was using the phone and the speaker. Plus it's tough as nails. This will always be at camp and in my pack.

M
Mark Robert
Not worth the money.

I saw a few recommendations for this through YouTube hunting videos. The first one I got I had to send back because the case was broken when I received it. The replacement now sounds like there is something rattling around inside it. I have only had this for under a month. The product has been very disappointing.

Received my first battery which was cracked and when pried open with minimal force it easily split open. Received a second battery and the same thing happened. For the price point and seeing how cheaply made the battery is it definitely not worth it. You would think a distributor of outdoor products would have some quality control or test products before they carry them but I guess not. 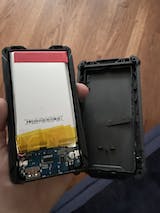